Windows 8.1 is a huge disappointment 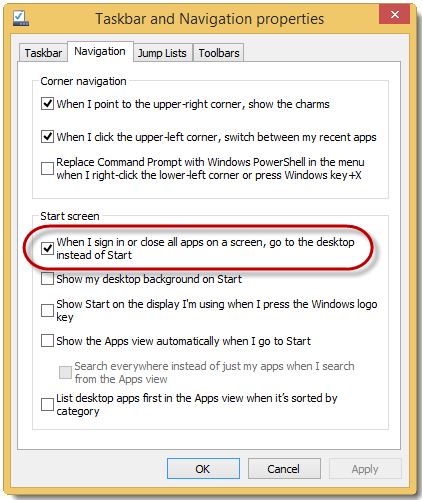 Microsoft is struggling to revive sales of Windows 8 by releasing the long awaited Windows 8.1 product. It promised to do 2 things that corporate users have been asking for, bring back the Start Menu and allow users to boot to desktop instead of tiles. Microsoft’s first attempt to go to a touch enabled OS was a huge failure. Even when comparing Microsoft’s own apps the Desktop Version of Office Apps like Word and Outlook are slower when using them in the Metro Tile App Screens. Toggling between Metro Tile apps is difficult and you can’t tell what app is running in the background because they are all full screen.

So last night I decided to download and install Windows 8.1 over my HP Laptop running Windows 8.0. Microsoft is providing Windows 8.1 as a no charge upgrade to all users who have purchased Windows 8. So I started the upgrade by running set-up on the DVD that had the Windows 8 Disk installed in it. It was a pretty tedious process and it told me it was saving my Documents and Settings. Sounds good right? However all my programs were gone when it came back online. I will now need to reinstall Office, Antivirus, and all other install programs and Tile Apps are GONE! Why didn’t the upgrade warn me? It really is not a big deal for me to reinstall everything but my clients that might try this themselves, this would be a huge deal. Luckily my laptop is more of a portable internet device and not my day to day work PC.

The other frustration was the amount of time it takes to do the upgrade I think it took almost 4 hours and restarted 4 times. Very little communication during the install and no warning you would have to install all programs again. Now it finally start up and it still goes to the Metro Tiles Screen and you have to go in to the properties of the Taskbar and check the box for “When I sign in or close all apps on a screen, go to the desktop instead of Start”.

This was the only good thing Microsoft did in this release. Microsoft was hinting that the return of the Start Button and Start Menu were going to be released to Windows 8.1. However although a Start Button was put on the release the functionality of it was totally changed. Now it takes you to the Metro UI or Tiles View. What a waste of time and duplication of something we really don’t need or want. I think Microsoft is so focused on forcing people to Metro UI they have still refused to give us the Start Menu back. Currently there are some third party add-ons for bringing the Start Menu back. I have been hesitant to use them since it could be a source of problems and I am the king the Command Prompt and RUN command. So if I need to run remote desktop I hit Windows Key + R and it brings up the run command and I type mstsc to start my remote desktop to any machine I need to control.

If Microsoft does not bring back the Start Menu, I predict Windows 8 will become the second biggest Operating System blunder since Microsoft Vista. Every PC we sell today has Windows 7 Pro installed or downgraded from Windows 8. Perhaps they need to Spin off Windows 8 Touch and Bring out a Windows 9 Corporate Edition with the start menu again.

We are a Microsoft Partner but unfortunately we don’t see eye to eye with Microsoft’s insistence on forcing users to the Metro User Interface. My goal as an Industry Expert is not to follow the herd to slaughter but rather stand up to the corporate giants who don’t live in the real world.